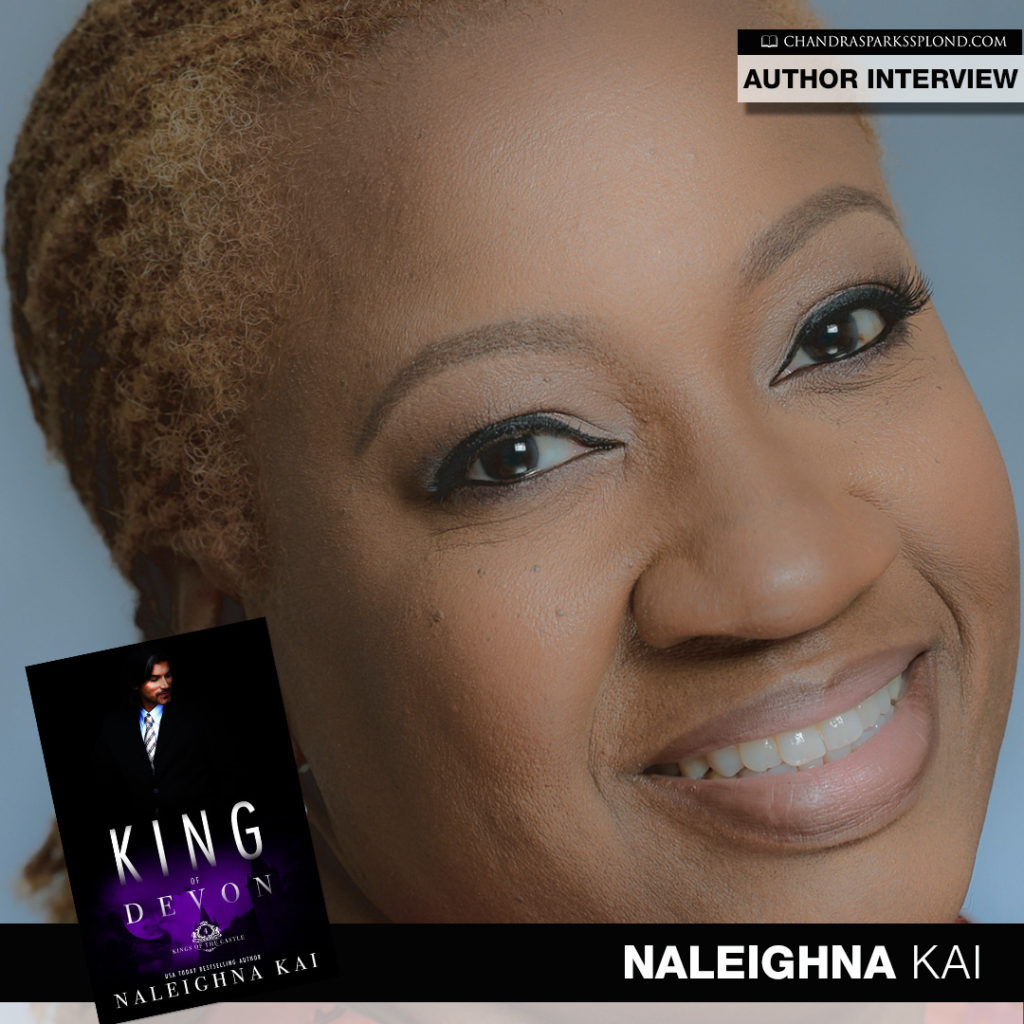 USA Today bestselling author Naleighna Kai is no stranger to finding her tribe. This time around, she’s joined with some of her friends for the Kings of the Castle series. I recently spoke with her about her contribution, King of Devon.

Tell me about your latest book.
King of Devon is part of the Kings of the Castle series. When a coma patient becomes pregnant, Jaidev Maharaj’s medical facility comes under a government microscope and media scrutiny. In the midst of the investigation, he receives a mysterious call from someone in his past that demands more of him than he’s ever been willing to give. He’ also made aware of a dark family secret that will destroy the people he loves most.

The first book in the series is one that nine authors collaborated on. USA Today, New York Times, and national bestselling authors work together to create a world the reader will never want to leave. The Castle. Powerful men unexpectedly brought together by their pasts and current circumstances will become a force to be reckoned with. Their combined efforts to find the people responsible for the attempt on their mentor’s life, is the beginning of dangerous challenges that will alter the path of their lives forever. Not to mention, they will also draw the ire and deadly intent of current Castle members who wield major influence across the globe.

Why did you decide to write it?
Recently, a story that hit the headlines intrigued me, and I incorporated it into the book because it became more of a “what if” for me. Each one of the stories in the series is a standalone, and this thread requires some interaction with the other Kings to deal with this issue.  The subject touches on political dealings when it comes to the medical community as well as the standard care for disabled, elderly, and those who are unable to fend for themselves. The fact that excellent healthcare has been subverted in favor of companies who make billions off of people remaining ill was my focus.

What do you want readers to learn from the story?
Because the story deals with second chances, I wanted to show that the Creator brings people and challenges into your life that at some point work to your ultimate good, even though it doesn’t seem that way at the time. Blessing or lesson. My main character, because of something that happened with his grandmother, created a medical practice that is all about blending the best of holistic healing. He defies the medical community who abhors his approach, even though he has an eighty percent success rate with those other medical establishments have written off as dead.  He pulls his employees from a pool of men and women who have made mistakes in their past but now are on a path that well set them apart from their families.

If you could pick another profession, what would it be and why?
Actually, writing and being an active part of the literary industry is that profession. Right now, I’m a legal assistant by day, and that’s what keeps the bills paid. Writing, editing, consulting, literary events—are my first loves. This is a fulfilling part of my life journey, and Chandra, you were a big part of that. Michael Baisden first started me on the path with three referrals. You, a cover designer, and a printer. Two of the three panned out. I never did hear from the cover designer. But you were, and still are, a blessing along this journey. And then when you branched out into writing yourself, I was like, “Hot dog! It’s about time.”

What’s the best part of being an author?
The joy of writing a book that resonates with so many others, and has a unique imprint because it is drawn from finding the light out of the darkness of my tragic experiences.  The healing part of my journey has been an amazing thing. The book that brought the most healing was first edited by Chandra. If I had not went into this book with the thought, What would it have taken for me to forgive me mother for what she did to me?, then I would never have learned the truth of my existence. I was a product of a painful sexual encounter, and my mother tried to abort me three separate times—hangers, stairs, large doses of a particular pill. I’m still here, and learned that my mother tried to give me to someone who would love and care for me, but fate had other plans. I was adopted by my biological mother because she had no choice when her sister ended up in prison. All of this came to light upon writing my second book—She Touched My Soul. My other novels also touch on elements of my life where I embarked on the process it took to heal.

Also, several times, I have put together groups that have achieved a great deal of success—Macro Literary All-Stars (M-LAS), NK Promo Partners, NK Tribe Called Success, and Tribe Inner Council.  All of these are author clients/friends who have come together to help promote each other, write projects together, and provide support in other ways that authors tend to forget is needed. I have succeeded well on my own. I have exceeded that success when I’ve been part of a group of like-minded and upward bound authors. Writing is a solitary process, but teamwork help make that writing known and gains visibility that an author can’t do on their own.

What’s the worst part of being an author?
Dealing with the cliquishness and separation that comes when some authors feeling they have “more right” to that path of success and others do not. That whole “us” against “them” mentality I run into from time to time. When I say that there is so much room now for everyone when there wasn’t when I started, I find it amazing that people still want to keep others from succeeding. My journey in the literary industry has been laid with a few mistakes of my own, but none of them have been intended to hurt or harm anyone. I own my choices and actions and have learned a great deal in the process and I’m constantly asking, “How could I have handled that better?” There were people who saw how fast my son  (J. L. Woodson) and I came up in the industry and didn’t feel that we paid enough dues. Those people taught me the biggest lesson. Favor ain’t always fair, but it certainly is yours if it lands on your doorstep. No mistaking that. I own that belief now, whereas before I did second guess all of the good fortune that came my way.

What’s next for you?
My focus will be on the Cavalcade of Authors brand. I just had the name and service mark trademarked to protect the business from some of the interesting legal exchanges that has happened in the literary community.  My goal is to combine it with several major events in different cities so that authors capitalize on more reader participation and get an excellent return on their investment.  Next year, we’re holding one in April (Chicago), possibly July (Cincinnati) and August (North Carolina), and definitely returning to the Atlantis Resorts in the Bahamas in October. Also, with the success of the Kings of the Castle series, I’m looking at another series related to this one with the next set of authors in NK’s Tribe Called Success.

This year, NK Tribe Called Success pulled off major advertising at the Cincinnati Music Festival, Black Women’s Expo (Chicago and Atlanta), as well as other literary venues. This is a serious group of authors who have melded over the past year and produced two three literary anthology offerings: Sugar, Spice, Kings of the Castle. We learn together and grow together and even supported each other emotionally, financially, and spiritually through personal crisis.

Do you have anything you would like to add?
Anyone who is thinking about writing, please pick up a copy of Baring it All: The Ins and Outs of Publishing. This is the book that I wish I had when I first started in the industry.  Also, be sure to check out my novels: Slaves of Heaven, Open Door Marriage, and Loving Me for Me.

Use my affiliate link to purchase your copy of King of Devon.

About the Author
USA Today bestselling author Naleighna Kai self-published two novels before receiving a book deal with Simon & Schuster for the controversial novel, Every Woman Needs a Wife. She is a developmental editor, agent, publishing consultant, literary marketing guru and founder of The Cavalcade of Authors annual events that are held nationwide. Her recent national bestsellers are Loving Me for Me, Slaves of Heaven, Open Door Marriage, and Rich Woman’s Fetish. Visit her on the web at www.naleighnakai.com, and all social media under Naleighna Kai.