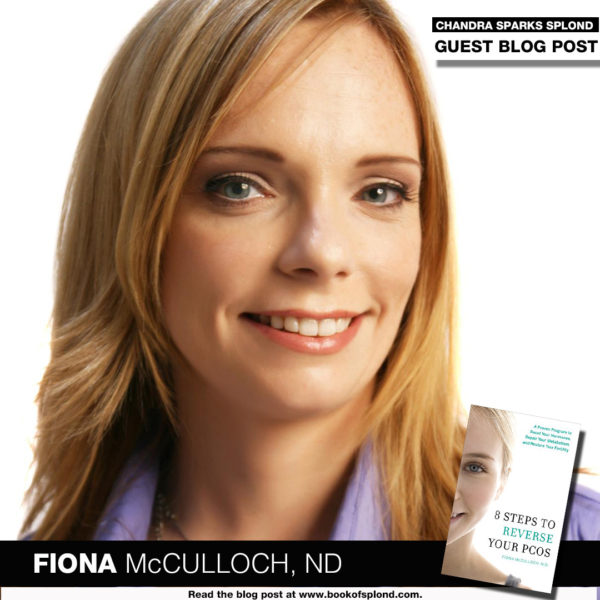 In honor of Polycystic Ovary Syndrome (PCOS) Awareness Month, I’m honored to have a guest blog post from Dr. Fiona McCulloch, N.D., who recently released the new ground-breaking book, 8 Steps to Reverse Your PCOS. The book offers answers and treatment for the disorder, which affects an estimated 116 million women. Welcome, Dr. McCulloch.

PCOS—What are the Signs of the Most Common Women’s Hormonal Condition?

Polycystic ovary syndrome (PCOS), is the most common hormonal condition in women, affecting an estimated 10-15%, or 7 million women in the USA alone. It’s a complex syndrome that affects a woman’s entire body including her metabolism, hormones, fertility, brain and her immune system. Though its name implies that cystic ovaries are part of the condition, many women with PCOS don’t have ovarian cysts – instead, PCOS is really a hormonal condition including insulin resistance as well as high levels of androgenic hormones, like DHEA-S and testosterone. Although androgens are essential for the health of women, levels that are too high can cause an array of problems.

Irregular or missed periods.
Delays in ovulation can the menstrual period to arrive late, or even to be missed altogether, as  typically the menstrual cycle arrives around two weeks after ovulation occurs. High levels of testosterone in women with PCOS slow the growth of follicles that house the eggs in the ovary, stalling the process of ovulation. These stalled follicles can be seen on ultrasound in some women, and are the “cysts” that the condition is named for. Even cycles that are 35 days long or more can be a sign of PCOS, though many women can miss their periods altogether. Usually these long cycles or missed periods start when a woman is young and continue on for years, sometimes improving as a woman gets older due to the natural age-related decline in female testosterone levels.

Weight gain
Around 75% of women with PCOS struggle with their weight, and tend to deposit fat around their abdomens, as opposed to the hips and thighs which is more typical in women. It’s also much harder for a woman with PCOS to lose weight. This is because women with PCOS are insulin resistant, and secrete much more insulin throughout the day. Insulin’s role in the bloodstream is not only to shuttle away the sugar in our bloodstream to be stored as fat, but it also works to block the breakdown of fat as well. Not only do high insulin levels make it harder to lose weight, they trigger the release of androgenic hormones.

The fat cells in women with PCOS function differently, secreting less adiponectin, a beneficial hormone that is associated with metabolic health. Fat cell dysfunction seems to be one of the underlying causes of insulin resistance that is so prevalent in PCOS.

Infertility
Although infertility isn’t present in all women with PCOS, it happens frequently enough that PCOS is the most common cause of female infertility, primarily due to its effects on ovulation. Many women don’t even know they have PCOS until they try to conceive and encounter difficulties. The good news is that either with time, or treatment, most women with PCOS will eventually conceive. As women with PCOS have an abundance of follicles and high androgens which tend to preserve egg quality, they also tend to hit their reproductive peak and go through menopause around two years later than other women.

Depression or Anxiety
Many women with PCOS suffer with mood disorders like depression or anxiety – and have increased frequencies of less common conditions such as obsessive compulsive disorder or bipolar disorder. A recent meta-analysis published in the journal Human Reproduction found consistently higher levels of emotional distress in women with PCOS when compared to controls. The symptoms of PCOS themselves are stressful—hirsutism, acne, weight gain, infertility, and irregular cycles can cause a lot of psychosocial challenges for women, however PCOS seems to be linked to psychological symptoms even outside of these stressors.

Hair Problems:  Hirsutism, and Hair-loss.
PCOS affects the hair—by causing too much growth in the wrong places, as well as hair loss from the scalp. Hirsutism, or the growth of coarse hair places like the face and abdomen is common in PCOS due to elevated androgens. Unfortunately, the growth of hair is selective, and PCOS is also associated with androgenetic alopecia – hair loss primarily in the frontal part of the scalp, though diffuse hair loss is common as well.

Skin Symptoms
The symptoms of PCOS also manifest on the skin and excess androgens and insulin can also cause significant acne. PCOS acne is often moderate to severe and usually presents on the jawline, back, or chest. It often persists beyond the teen years and/or doesn’t relent after treatment.

In addition, women with PCOS are prone to boils, occurring in the areas such as the groin, or armpit—a condition known as hydradenitis suppuritiva.

Even if androgen levels in the blood are normal, if skin and hair symptoms are present, they could be a sign of PCOS.

Inflammation
Low-grade chronic inflammation is a central part of PCOS and is implicated in causing many of it’s unpleasant side effects. Inflammation is thought to be the underlying cause of insulin resistance, and to be responsible for the increased risks of type two diabetes and cardiovascular pain. Women with PCOS are prone to a wide variety of inflammatory conditions ranging from gingivitis, joint pain, TMJ, and even to autoimmune disease like Hashimoto’s thyroiditis.

Although PCOS has long been associated only to women of reproductive age, we now know it’s actually a lifelong health condition that increases risks for type two diabetes, and cardiovascular disease and that these risks endure long past menopause. The earlier a woman knows that she has PCOS, the more likely she will be able to take action and be empowered to prevent chronic diseases like type two diabetes, and cardiovascular disease. Changing lifestyle and nutritional habits soon after diagnosis will empower women to improve their not only their hormonal regulation during the reproductive years but also to minimize the metabolic and cardiovascular risks later on in life.