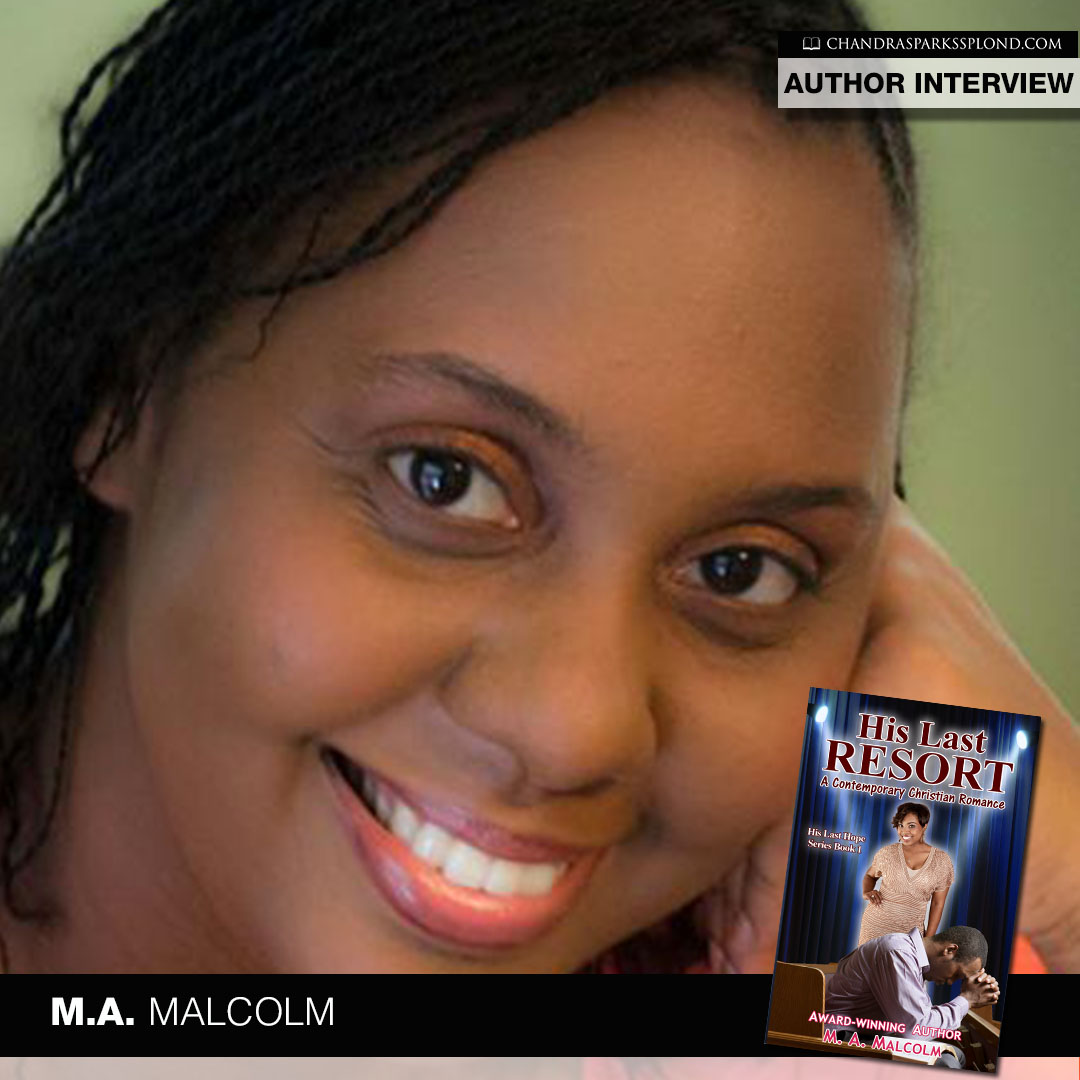 Author M.A. Malcolm is still blown away by her success. I recently spoke with her about her book, His Last Resort.

Tell me about your book, His Last Resort.
His Last Resort is the prequel to my debut novel, the award-winning His Last Hope. In His Last Resort, readers meet Claire, a small business owner, makeup artist and relatively new believer, who is not quite sure of who she is and the purpose for which she was created. She encounters Robert Marsden, a minister-in-training, who feels that Claire’s interest in outward appearance is evidence that she is not really a Christian. Although Claire is immediately attracted to him, Robert does not think she is worthy of his attention. With the guidance of their mutual friend, Aunt Ruby, they both enter a period of introspection and reflection, and both of them end up changed in ways they could never have anticipated.

Why did you decide to write it?
I would have to say this was definitely a “Spirit” thing. I was reading my Bible one day and came across the scripture from 1 Peter 3, in which Peter speaks about genuine beauty coming from within. I wondered how this scripture would be interpreted by someone who makes their living catering to external looks. I’m not sure exactly when this plot began to develop in my mind. I’m not even sure how long it took to write, since I’ve been working on several manuscripts at the same time. All of this is, for me, further evidence that the Holy Spirit has been the “Holy Ghostwriter” of this story.

What do you want readers to learn from your story?
It’s kind of funny. The message I wanted to send was that we should not judge other Christians just because they have a different lifestyle than ours. Yet more readers have contacted me to say they were convicted by the part of the book that dealt with the need for us, as Christians, to study scripture for ourselves and not depend too much on the interpretation of others. I never expected that to resonate with readers as much as it has.

What do you want readers to learn from your life?
I want readers to understand that when we yield to the Lord and ask Him to use us for His glory, He can set us on a path we never anticipated for ourselves. Professionally speaking, I was satisfied with my job as an assistant college professor who worked as a copy editor “on the side”; writing fiction was never a big dream of mine, so when I hear myself referred to as an award-winning, bestselling Christian author, it really blows my mind.

Who is your favorite author and why?
Even though I’m an avid reader of Christian fiction, my favorite author is Colombian novelist Gabriel García Márquez, so much so that his work was the focus of my master’s dissertation. He was a master of magical realism, and had a special gift of presenting everyday life in such a way that it became magical, while presenting supernatural events as if they were everyday occurrences. I have probably read almost every piece of fiction he has ever written.

What’s next for M.A. Malcolm?
I’m working on two manuscripts in the His Last Hope series. I hope to have them both ready in 2018.

Do you have anything you would like to add?
I published a children’s book, So very…Max! in 2016, as a direct response to my son’s demands that I write him a book. So very…Max! tells the story of a foal who is different from all the others on the horse farm. Eventually, Max begins to see that the things that make him different also make him special. The book was written to help children understand that we are all special in our own way.