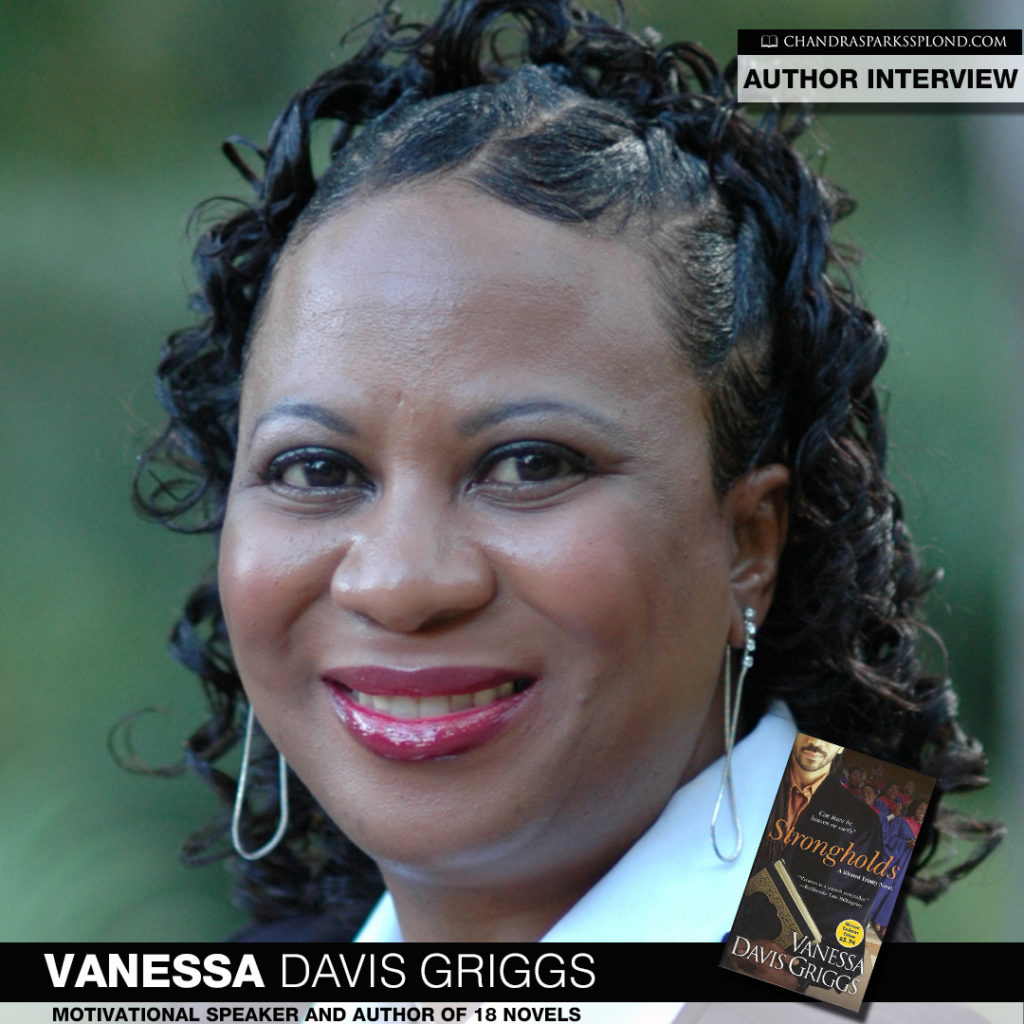 If you haven’t been to Walmart lately, now is the time to go and grab your copy of Strongholds by author and motivational speaker (and former Momma of the Month!) Vanessa Davis Griggs. I recently spoke with Griggs about the exclusive re-release of her novel, which is one of 18 she has published.

Tell me about your book, Strongholds.
Strongholds is the story of eight characters you meet who are dealing with various things that they would prefer not to be dealing with. When Pastor George Landris, the dreadlock-wearing minister of the new mega-church, Followers of Jesus Faith Worship Center, urges his congregation to approach the altar and cast off their strongholds–also known as their weaknesses–it’s the start of intense soul-searching for many. Originally released in trade paperback by Kensington/Dafina in 2008, a year after that Walmart had it as an exclusive edition in mass market. One year after that, Strongholds released to all booksellers in mass market. In September 2016, Walmart once again requested and received a “Walmart Exclusive Edition” of this novel putting it on the shelves in their stores. God is so good!

Why did you decide to write it?
I would oftentimes have these 4 a.m. wake-up calls where I would hear God telling me to do something. This particular time, I’d just returned from a conference in Georgia when God awakened me and told me to write a book and to call it Strongholds. God further instructed me not to come at it from a “sin” standpoint, but rather from a strongholds standpoint since there are many things that we may not consider a sin but could very well be a stronghold. There is a true example of just this with one of the characters who is doing something we all would consider an honorable thing for a good man to do. But we see how even what may appear on the surface to be a good thing can easily generate negative consequences.

What do you want readers to learn from Strongholds?
We all (or many of us) have something that very well might be keeping us from reaching, achieving, having, and doing all that God has for us. The challenge is to stop long enough to see that is indeed the case and learning what might be holding us back or down. In other words: What stronghold do you need to pull down.

Who is your favorite established author and why?
I always hate answering this question! LOL. Two of my favorite authors are Og Mandino and Toni Morrison. Og Mandino because his stories have hidden truths that can truly make a difference in how one views things in life and in the world. And Toni Morrison because I love how much effort and precision she puts into each and every word she writes, making each word carry its own weight. My goal has always been to give folks my very best and to let them know they are so important that I weigh every word I write as well. Purpose in the process!

Who is your favorite new author and why?
I can’t pick just one. The publishing industry is really in a weird place right now so maybe I’ll answer this question the next time.

If you could have any profession other than being an author, what would it be?
Everybody used to think I was going to be lawyer (which I believe I would be good at), but I truly love helping folks with their problems and situations that I could see myself as a therapist or counselor or something in that vein.

What’s next for Vanessa Davis Griggs?
More books released for sure. I’m believing I’ll have a movie made of my books at some point (God knows the timing).

Do you have anything you would like to add?
I’d like to thank you, Chandra for all that you do! You are truly a blessing! If I may, I’d also like to encourage anyone who is tired and plain ole ready to quit. Hang in there! Many times what you see as a roadblock is really only a test to see just how much you truly want “it.” I often say that if what you’re attempting to do was easy, then everybody would be doing it. What separates those who do and those who don’t is the one who refuses to quit no matter how hard things get. I declare victory for everyone reading this right now who have faith to believe!