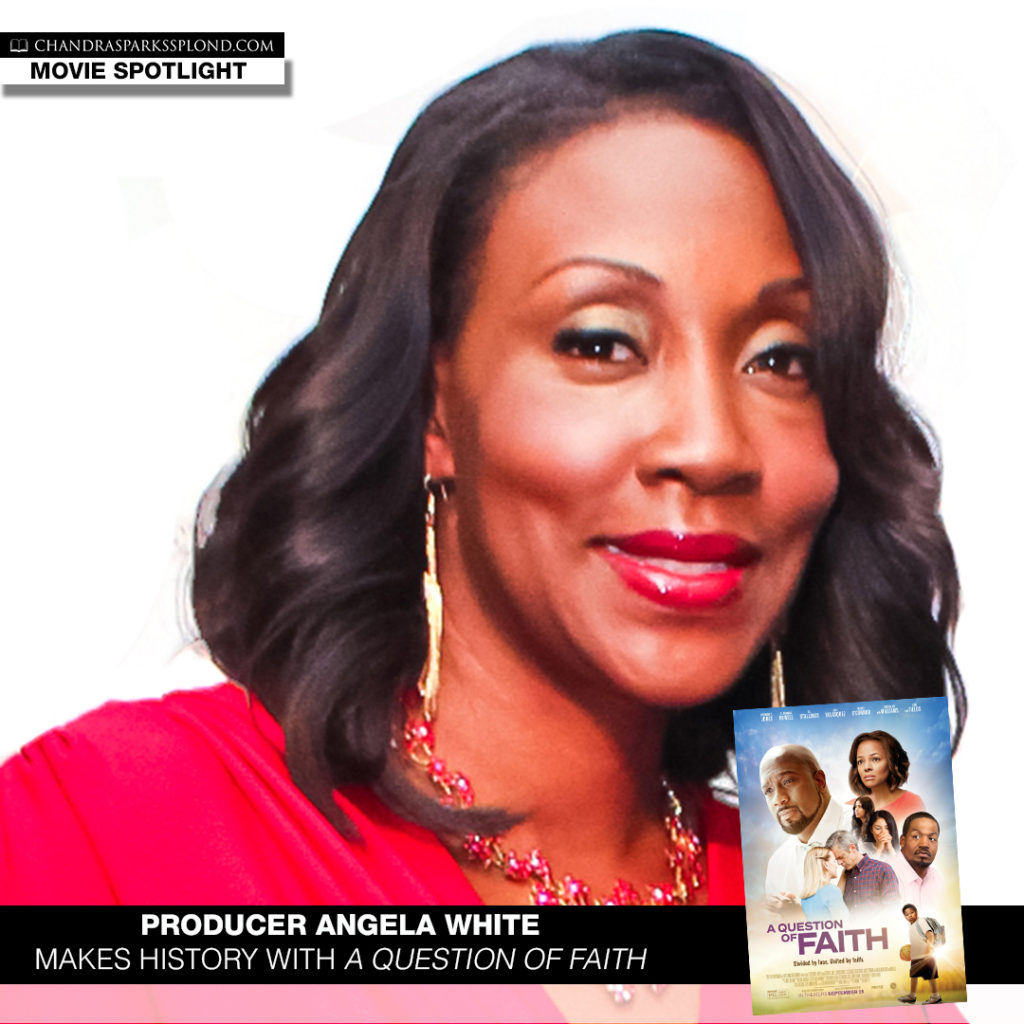 Veteran producer Angela White is about to make history with the release of A Question of Faith. The film, which includes an all-star cast, is White’s first faith-based movie and the first of its kind to have been produced by an African-American woman. I recently spoke with White about A Question of Faith and the importance of pursuing your dreams.

Tell me about A Question of Faith.
A Question of Faith is a beautiful story that follows three different families, who are struck by tragedy, which forces their destiny on a converging path to discover God’s love, grace, mercy and the power of forgiveness.  In “A Question of Faith,” all three families find themselves at a crossroads, questioning their faith and the higher power that guides their lives, as a result of their tragedies. As each family member deals with their issues, their worlds start to intertwine, which leads to a chain of events, which unknowingly brings the three families closer and closer together.  Further, the film deals with social issues, such as texting and driving, organ donation and the power of racial reconciliation.

Why did you decide to be a part of it?
I was looking for a faith-based script early last May and I knew about this script from a previous introduction to the writer a year prior.  I re-read the script and decided to option it when I noticed some of the social elements blended well with also showing the love of Jesus Christ.  At this point, my company, Silver Lining Entertainment, became the production company and I was the lead producer and started putting together a team of professionals to execute the vision of the story.

What do you want people to learn from your life?
As I have pursued many careers, despite many ups and downs, life has taught me that faith can get you through the impossible.  I never attended film school, and in a few weeks I will be releasing my first theatrical film to a large audience.  In addition, I will be the first African-American female to produce a faith-based theatrical film.  When people told me no, or doors were closed, I never allowed that to determine my destiny or God’s purpose for me.

What’s the best advice you have ever gotten?
Over the course of my life, a lot of wisdom has been imparted on me, shaping me into the woman I am today.  However, if I have to choose one, it would be that “no one knows anything.” I first heard this in 1998, and it has stuck with me along my journey.  The piece of advice is basically reminding one that you can pursue any dream regardless of whether or not it has been seen.  Also, that one person’s perspective, opinion and past experience does not determine how things will turn out for you.

What advice do you have for others interested in pursuing their dreams?
I like for people to stay encouraged, keep focused and avoid negative distractions when pursuing your dreams.  The wrong advice or influence can have a negative impact on your future.  Do not let the word no stop you from pursuing your Godly purpose in life.  If you are constantly facing a dead end, learn how to go around the wall to achieve a different result or re-shape your thought process in pursuing the dream through different doors and lenses.  Always seek mentors who can give you sound advice, so you can avoid pitfalls that may not be transparent to you.  Ultimately, keep God first, make smart choices, be kind to others and try to avoid negative influences.

What’s next for you?
I will continue producing feature films with core family values from a multi-cultural perspective.  Silver Lining Entertainment’s next feature film will be another faith-based film, which will highlight current social issues and how answers can be found in the word of God.
Do you have anything you would like to add?
A Question of Faith deals with many timely social topics, such as the devastating consequences of texting and driving, the significance of organ donation and the importance of racial healing during a time in this country that is undergoing turbulence in places such as Charlottesville, Virginia.  However, the power of loving each other in times of immense struggle and devastation is being currently shown in Houston, Texas.  We are all one people and God’s children, and I really hope that this film can help in that pursuit of healing, reconciliation and the power of forgiving our fellow man.  I do not want people to think this is just a “faith-based film” that only speaks to one’s Christian walk. We weave and tie in human stories that impact our fellow neighbor, family and community, and we encourage everyone of all faiths, races and genders to go see A Question of Faith on September 29. See why we are all God’s children and we are better off as one people.