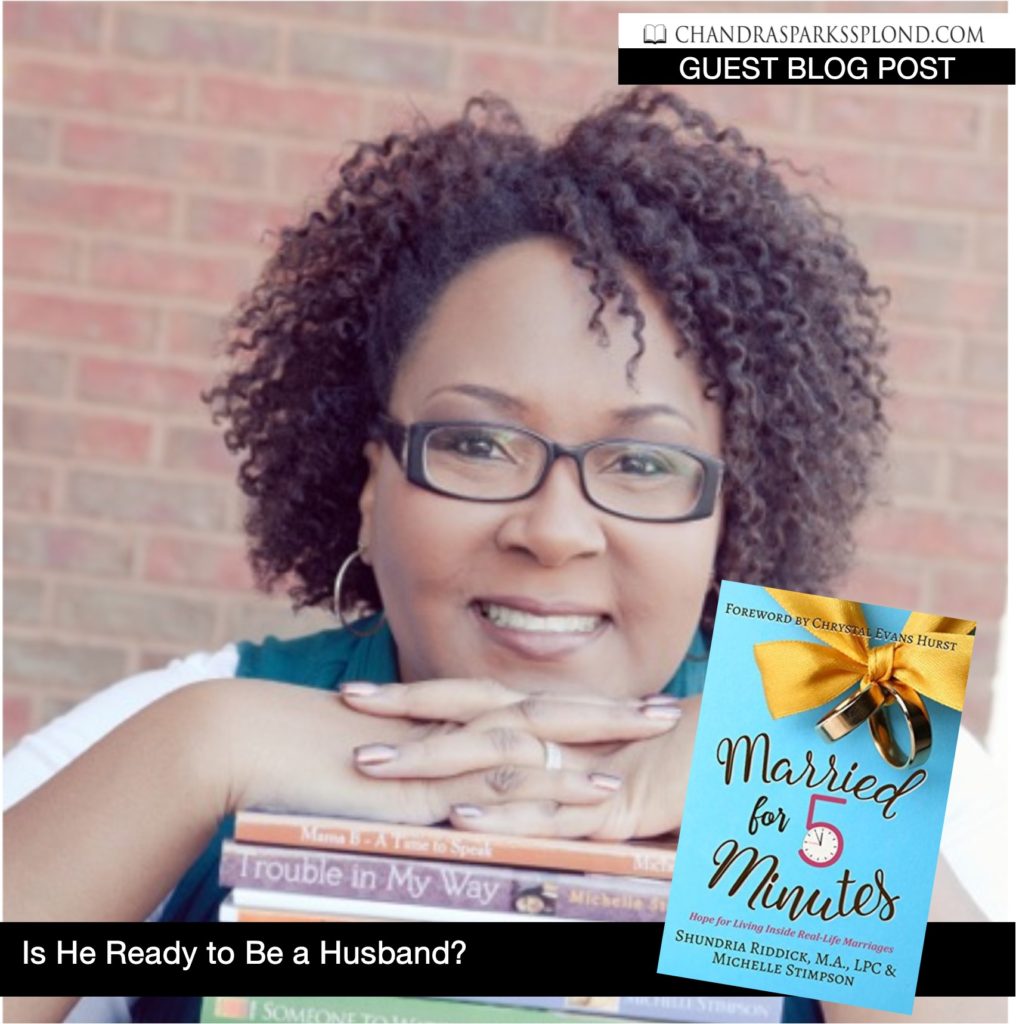 Thinking of getting married? I’m honored to have author Michelle Stimpson visit today to discuss whether your boo is ready to be a husband.

In ministry to women, I’ve been blessed to meet several Christian sisters who profess to know Him and be actively seeking God but are still unsure of what a godly man looks like. Let me be clear: No ma­­­n is perfect. Some men are wolves in sheep’s clothing, but I believe that many more just need an opportunity to grow as people and in their relationship with God before they are ready to marry.

To that effect, let me share advice many women have shared with me—clues that he is either is not a godly man or is not ready to be married to one of God’s precious daughters at this time. While we are not in a position to judge a person’s salvation, it is possible to see the “fruit” of the Spirit as clearly outlined in Galatians 5:22. Each of the characteristics below could easily be classified under one or more of these traits.

Let me forewarn you: The tone of the advice is strong because the women who shared the tidbits were adamant in their discussions. Here goes!

Contrarily, a man who speaks life and goodness into and about others will readily prophesy God’s goodness over every aspect of your marriage. When tough times come, he will speak edifying words that build you both!

A husband who loves the Lord seeks to obey Him (John 14:23-24). A wife who trusts in the Lord alongside a husband who honors God can rest in the fact that even when she’s not 100% sure of where her husband is leading, she can trust that God will honor her husband’s decision and her obedience.

Why is this important? The man is the head of the household (1 Corinthians 11:3). A man who actively seeks God for guidance will find it (Matthew 7:7). What a blessing it will be to know that your husband is consulting the Master about your marriage!

If it’s “in him” to do right by his children and remain respectful to the mother of his child(ren), he understands what it means to hold up his end of an obligation.

Do your future husband a favor: Allow him the time he needs to develop the confidence of knowing that he is capable of being a good provider. An able-bodied man who knows he can support his wife and children by the grace of God has fulfilled one of his God-given roles (1 Timothy 5:8). My personal advice to newly married couples is to try not to create a lifestyle that requires two full-time salaries.

A patient husband can bring peace into an otherwise volatile situation. His calm presence alone de-escalates disagreements and keeps drama out from under your roof. Whether he is patiently teaching your son to tie his shoes or choosing to make a funny comment instead of arguing, his even temper will bless your household for years to come.

A man who is filled with the joy of the Lord may not walk around whistling and smiling all the time, but he can face each day with hope, knowing that Christ will prevail regardless of circumstances. He can roll with the punches in your marriage because his joy is secure in God.

A husband who forgives easily will be your treasure from now until death do you part. After all, he has to put up with you, right? Because he understands how easily Christ forgave him, your husband shares that same heart for you. He will speak the truth in love in an effort to restore whatever the enemy is trying to steal from your marriage.

The good news here is that, with effort, your husband can learn how to communicate the goodness in his heart. A wife who knows what her husband desires (and vice versa) is in a much better position to give him what he wants.

A generous heart goes a long way in a marriage! A generous person approaches finances, time, goals, and even sex with a considerate mindset. Quite frankly, wives tell me that it’s just flat-out easier to lavish love on a man who so freely gives of himself.

The bottom line for a godly husband can be summed up in this question: Does he resemble your Heavenly Father? If you don’t see any fruit, it’s probably because there is no root or the root hasn’t grown deep yet. No one will ever love you like your Heavenly Father, but you should at least see some of His characteristics flowing through the man you intend to marry.

Along this same line, if you’re attracted to a man who doesn’t show any fruit, you’re not ready to enter a covenant, either, because no woman of God who understands her value in Christ would sign up to be with someone so far from her Father’s heart. Don’t make excuses for him or for yourself.

Seek God about your future spouse. Just today, I was talking to a newlywed who said to me, “God didn’t say no—so I took that as a ‘yes’.” Ask God to let you know if this person is His best for you and be willing to walk away if the answer is “no.”

Finally, know that a real man of God doesn’t want anything less than a real woman of God. If you have been leading him into temptation, cursing him out, and paying his bills, it’s no wonder you are with someone who’s so out of line. This is the blind leading the blind! Come out of darkness. BE the godly person you want to marry. Surrender to Christ and let His light shine in you. It will repel the ones who are not for you and attract one who is.