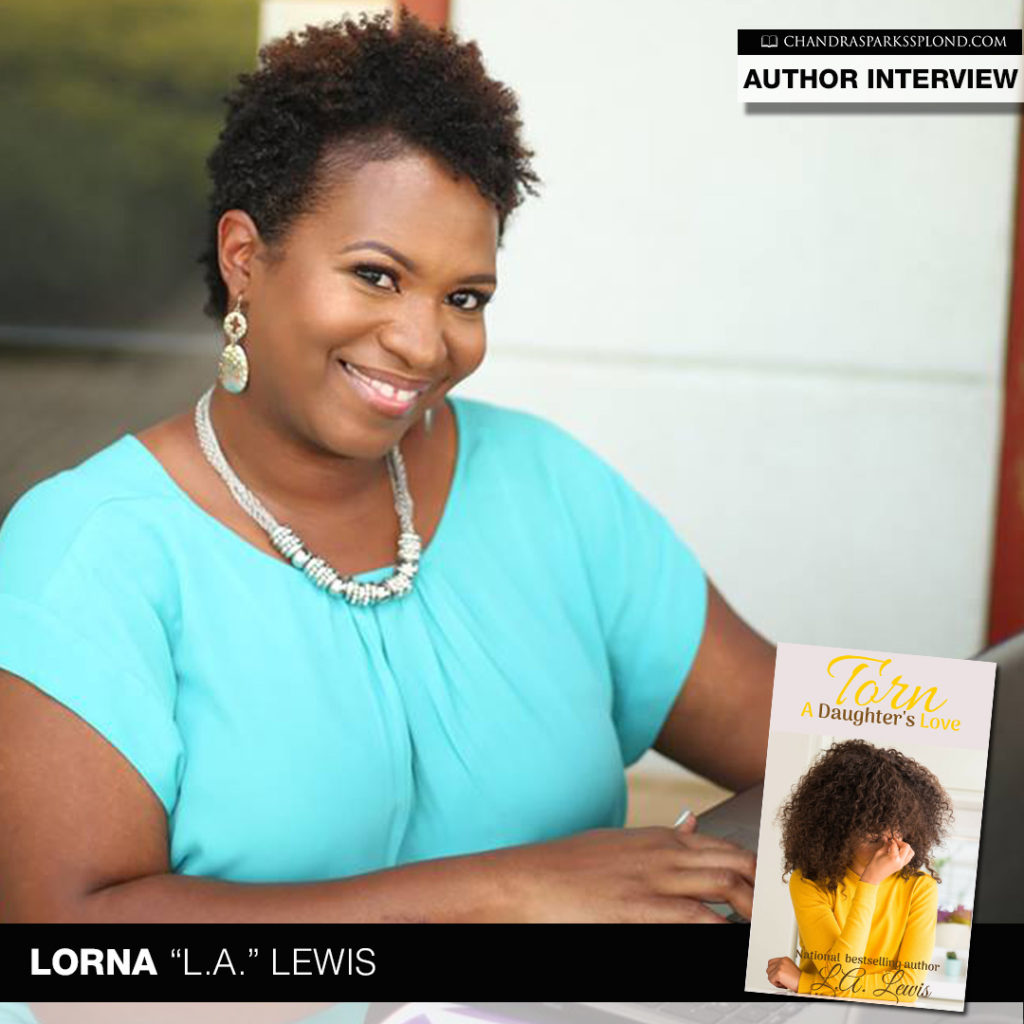 What would you do if you had to choose between saving the lives of two family members? National bestselling author Lorna “L.A.” Lewis tackles the topic in her latest release Torn: A Daughter’s Love.

Tell me about your short story, Torn: A Daughter’s Love.

Torn is a story about a daughter, Angel Brooks, who has been put in an impossible situation. Her mother and father are in need of a kidney, and Angel is a perfect match… for both of them. Angel feels the decision isn’t who she’ll choose to live, but rather who is she willing to let die.

Why did you decide to write it?
I was watching a show where a couple were both looking for a suitcase that contained a large sum of money. They found the money at the same time, which put them in a challenging position. She needed the money to save her brother’s life, and he needed it to save his best friend. As an author whose mind is always asking “what if?” I wondered what if the situation was different. What if the stakes were higher? Then I imagined the worst-case scenario from a personal standpoint. Thinking of having to choose between my children was way too hard, so I decided to switch it. What if I had to decide between my parents? Still very hard and very difficult. Once I had that much, the ideas started flowing. I knew I had to write the story.

What do you want readers to learn from the story?
The main thing I want people to learn is how neglecting their health not only affects them but also the people they love. The readers may not find themselves in the situation that Angel’s in, but they may have to be caretakers or even worst, have to suffer through losing a loved one from a disease that could’ve been managed by eating healthy, taking their medicine as directed, and exercising. Our health is our most valuable asset and once it’s gone sometimes it’s too late to turn it around.

You’re wearing a lot of hats these days.
Tell me about some of your other business ventures. I am and I have to say I’m loving all of them. In addition to writing, I’m also a writing/publishing coach. My job is to take my clients from planning to publishing. I guide and motivate them through the writing process, working with an editor, finding a graphic designer for their book cover, and publishing their book.

I’m also working on filming a YouTube series that I created titled Secrets from the Bayou. We filmed the first episode and held a premiere, which received great reviews. I’m now working with more writers to get more episodes written and filmed.

I’m also in the process of working on my fourth novel, Love, Lies, and Secrets, which I plan to release this year.

Angel would tell my readers that no decision should ever be made, especially one so important, without praying about it first. She would tell them it’s important to be patient and allow God to show you what your next step should be. Sometimes, as you’ll see in the story, He has a way of showing His will and along with that comes peace of mind.

What’s next for L.A. Lewis?

What I see in my future is writing more novels, growing my coaching business, and continuing to study and grow in the film industry, not only as a writer but also as a director.

Do you have anything you would like to add?
I would like to encourage everyone to use their words and experience to make a positive difference in the world. I’ve worked with many women, who have endured imaginable pain, and they are now turning that pain into a message for others. I believe we all have something worth sharing. Instead of keeping it bottled inside, use it to make a difference.

Use my affiliate link to purchase your copy of Torn: A Daughter’s Love.

To learn more about Lorna “L.A.” Lewis, visit her website or connect with her on social media.