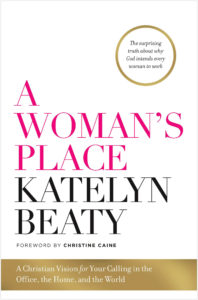 I’m excited to share an excerpt from A Woman’s Place: A Christian Vision for Your Calling in the Office, the Home, and the World by Katelyn Beaty.

Beaty is managing editor at Christianity Today magazine—the youngest and the first woman to serve in that position. She is the cofounder of Her.meneutics, a daily website covering news, cultural trends, and theology from the perspective of Christian women.

Excerpt from A Woman’s Place by Katelyn Beaty

You don’t have to be a missionary in the traditional sense to live on mission in whatever professional field you inhabit. If the earth is the Lord’s and everything in it—again to quote King David—there is truly no sphere of human activity that God isn’t bent on reaching and remaking.

But for women to live on mission, we Christians need to massively rethink how we think and talk about work. In both subtle and not so subtle ways, Christian women are being discouraged from thinking of work as a good, direct way of bearing the image of God and living on mission for him.

First, despite new energy around the topic of work in some Christian circles, many still aren’t talking about work, for men or women. Which is weird, since so many of us spend the majority of our waking hours at work. Julia Snyder, an educator in Philadelphia, told me that “everyone was a professional” at her former church in Boston, but, “there was no context in which people were talking about the effect that it was having on their faith.” Because of this, she was more likely to talk to non-Christian peers about her work than Christian peers. This is a huge missed opportunity for the church to speak into a large part of most believers’ lives.

Second, some Christian communities are talking about work in ways that are destructive and, frankly, unbiblical. One especially maddening example of this came from Liz Aleman. She serves on a legal team in Oakland, California that advocates for children and teenagers in and out of court. At the office, she says, “I don’t ever feel put down because I’m a woman.” This has not always been the case. When she was twenty-two and excitedly told a pastor that she had been accepted into law school, “he said that I should consider the fact that no Christian man would want to marry a lawyer.

“This was heartbreaking, especially coming from a pastor whom everyone respected,” says Aleman. “That is one of my deepest wounds, is the fear that Christian men won’t like me because I’m a lawyer.” In moments when some pastors and other spiritual leaders have a chance to bless women in their Psalm 8 call, they are cursing them, even as they think they are helping.

Other Christian communities simply don’t know how to speak to the discipleship needs of high-powered women. This was true for Helen Young Hayes when she managed an $11 billion mutual fund in the 1990s. “The church did not know what to do with working women,” she said. “There was a constant feeling of being less spiritual because I was full-time career, and much less spiritual when I was fulltime heavy-duty career and I’ve got kids.” Hayes experienced two stigmas at once: the stigma of working in the financial sector, and the stigma of working while having children.

Even at churches that don’t teach that women shouldn’t work while raising kids (and some churches do—we’ll get to those teachings in Chapter 4), there are still subtle ways that working women remain outside the church fold. Jessica (who prefers anonymity) teaches college writing courses in Austin, Texas, and in 2007 founded a nonprofit that teaches Burmese refugees to make sellable handcrafted items. Jessica and her husband, Jonathan, have three children, and she says they are both “really committed to partnership,” in their parenting as well as their ministry endeavors.

But every Sunday morning for five months, without fail, another woman at church would ask Jessica, “How do you manage it all?” As she told me in 2014, “I realized one day, no one ever asks my husband, ‘How do you manage your time?’ ” It was assumed that Jessica was shouldering the parenting, home, and professional responsibilities all by herself, and probably struggling to do any of it well.

And some women really do shoulder most of these responsibilities. To a person, every woman I interviewed who is able to invest in professional work said she wouldn’t be able to without her husband’s full, active support. Not just verbal support but the kind of support that will cook dinner and do the laundry and take the kids to the grocery store. The kind that will bring a nursing baby to and from the office. Thankfully, many Christian men are laying down their lives for their wives in this way, fulfilling a husband’s call to “love his wife as he loves himself” (Eph. 5:33).

Add into this already complex equation the endless debates over parenting styles; the lack of models and mentors; outdated workplace policies; a cultural fear of powerful women; and theology that teaches that secular work is less meaningful than ministry, and it seems nearly impossible for women to live into their Psalm 8 call on the job. But it’s not impossible—far from it. If the women I interviewed—as well as the eight women I profile in each of the following chapters—are any indication, more Christian women are making work work, for their families, their communities, and themselves. We could look askance at these women, wondering if they are neglecting their children or in the fatal grip of secular feminism. But I trust we’ll let their stories speak for themselves—and, in the process, wonder what God is up to.

Content provided by Howard Books, an Imprint of Simon & Schuster.