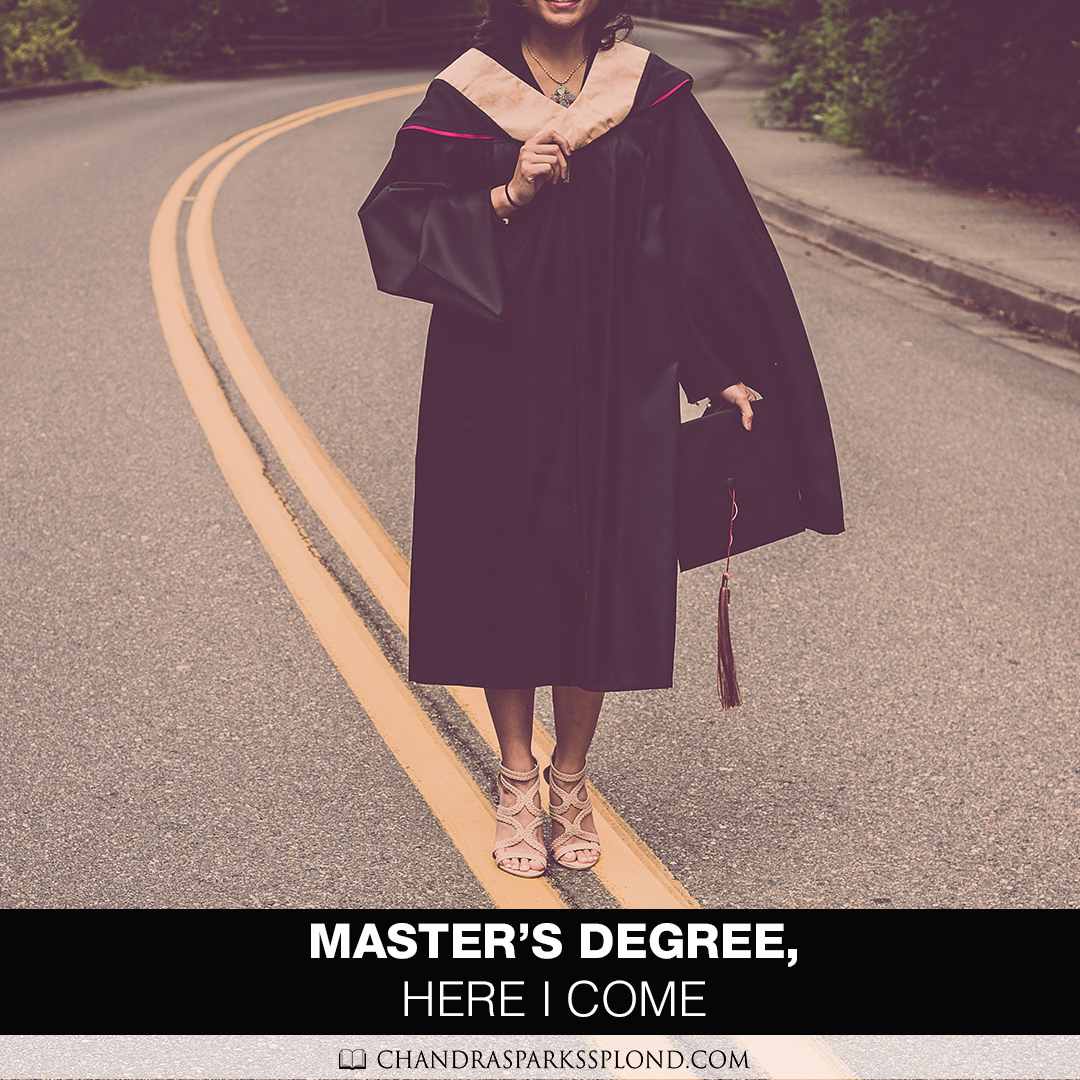 Today marks the first day of classes for my last semester of graduate school. That’s right, after running scared and living in fear for 23 years, I’m one class away from having my master’s degree this December.

Last year, my boo thang and I were sitting around talking when suddenly I had this ah-ha moment that I needed to go to grad school.

For more than 20 years, I have insisted emphatically that I had zero desire to go back to school. As an author, editor, blogger and speaker, I’ve experienced what most people would consider to be success with having only a bachelor’s degree. As far as I know, not having a master’s degree really hasn’t hindered me in any way professionally. During my conversation with my husband, I realized that it has hindered me personally.

I don’t tell many people, but years ago, I really wanted to go to grad school. I was torn between getting a master’s and a law degree, and I finally settled on a master’s. I took the GRE, and I did horribly on it. (Part of that might have been due to the fact that I didn’t study at all.) In fact, my score was so bad that I didn’t even bother actually applying to grad school. In a lot of ways, even though I didn’t realize it at the time, bombing that exam fueled me to work harder. I needed to prove that I didn’t need a graduate degree to be successful, and I told myself for 23 years that I didn’t want one.

My ah-ha moment made me realize that I did in fact want the degree. More than anything, I have been afraid of failing.

After realizing what was happening, I made it my mission to not only apply to grad school, but to get my graduate degree. Last year, I took—and passed—entrance exams and got accepted into grad school. Now, a year and half later, if all goes according to plan, almost 25 years after getting my undergraduate degree, I will have a master’s right before my daughter starts high school. Graduation is almost here, and my eyes are fixed firmly on the prize of having that degree in hand.

I have been telling my daughter since she was a baby that her priorities in life are to graduate high school, then college and then get at least a master’s degree before she thinks about getting married. Maybe it’s because I realize that a master’s degree is the new high school diploma and in order to compete, she needs those degrees in hand. As an adult, I know the value of education, and it is my job to instill that value in her and to set an example for her by mirroring what I want her to do. Surprisingly, my classes are comprised of adults like me who have realized the value of an education—or maybe they’ve had their own ah-ha moment and realized they have been running scared all these years.

The last year and a half have made me realize that it’s never too late to admit your fears, move forward and make your dreams—even those you didn’t realize you had—come true.

If there is anything that has you running scared, maybe it’s time to face your fear and do it anyway too. If I can do it, so can you.