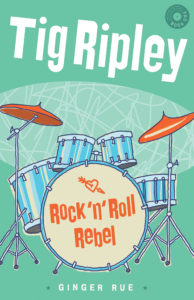 Ginger Rue is ready to rock. I recently spoke with her about her latest novel, Tig Ripley, Rock ’n’ Roll Rebel.

Tell me about your book, Tig Ripley, Rock ’n’ Roll Rebel.
It’s a book about a middle school girl who decides to learn how to play the drums and start her own rock band.

Why did you decide to write it?
I had done a couple of standalone novels and wanted to try something with series potential. I thought, I need something with an ensemble cast so there will be plenty of fodder for future plots. so I knew I wanted a group of girls joined together in some sort of interesting way. One night my now-husband and i were watching TV and a documentary came on about an all-female band. We watched a little bit of it and Dwight said, I had no idea they had such a story,” and my reply was, “Well, with five people in a band, there’s bound to be a lot of conflict.” and then I thought, Hey! That’s a series! Plus everyone is interested in music and bands—so there it was.

Why did you decide to write for young readers?
My first job out of college was as a seventh-grade English teacher. It was the only job I could find and I thought, Oh, no! Seventh graders!? I hated being in seventh grade, so I thought this would be torturous. But it turned out I absolutely loved it. A big reason for that was that I had a wonderful headmaster who believed in me and really mentored me. His name was Bill Campbell, and I owe him a great debt for giving me the opportunity to work with kids, which ultimately led me to my doing what I’m doing now. I also got a lot of encouragement from a magazine editor of mine, Mary Lou Carney, who hired me to write an advice column for teen girls. She took me in her office one day and told me I had a special voice for young people–not too “I’m one of you! I’m cool! I’m your buddy!” and not too “Let me preach to you because I’m an adult and I know everything!” That meant a lot to me, and the insane amount of fun I had with the editors of that magazine, plus that very kind encouragement, led to my writing my first book for teen girls. I just really love young people and tend to have a great rapport with them, so writing for them feels very natural.

What do you want readers to learn from Tig Ripley?
Tig wants to be a rebel—not in the sense that she wants to disobey her parents or teachers or cause trouble—but she wants to rise above the usual order of things. She doesn’t want to be defined by a label at school. She wants to be her own person. Plus, she is stubborn and determined, and I like that. I think a little fire in one’s belly goes a long way.

Who is your favorite established author and why?
My all-time favorite is William Faulkner, which I guess is funny because certainly no one would detect his influence in my work, but what a genius he was.

Who is your favorite new author and why?
I couldn’t really say. I like almost everything I read on some level. There are writers I admire for different reasons. For example, I only just recently read The Curious Incident of the Dog in the Nighttime (I was very late to that party, I know!), and like everyone else, I was so impressed with the author’s command of voice. And then there are people like Irene Latham, who is a friend of mine by the way, who have such authenticity and texture in every detail. Irene’s a poet as well as a novelist, and she is just good at everything, and she is such a nice person, which makes me admire her even more.

If you could have any profession other than being an author, what would
it be?
I’d go back to teaching. Sometimes I really miss it, especially when I see the wonderful teachers who have such an impact on my own children. What a great work these people are doing, encouraging and loving our children, day in and day out. Plus, the kids are just so much fun! I think it’s a little like childbirth: I forget the paperwork and the meetings and remember how much fun I had with my students and how I loved them. Whenever I run into a former student, I feel so happy (well, 99% of the time!). They were so special to me. Who knows? When my children are grown, I might go back.

What’s next for Ginger Rue?
I have a series coming out from Aladdin next summer (2017). The books are about a girl named Aleca Zamm, who can stop time just by saying her name. Oddly enough, I came up with the idea when I was in sixth grade! The Aleca books are for upper elementary grades, so that’s new, but it’s been really fun. My editor likes my weird sense of humor and encourages me to add more jokes, so it’s been a blast working on them.

Do you have anything you would like to add?
I appreciate your interest! Thank you!

To learn more about Ginger Rue, visit her website.