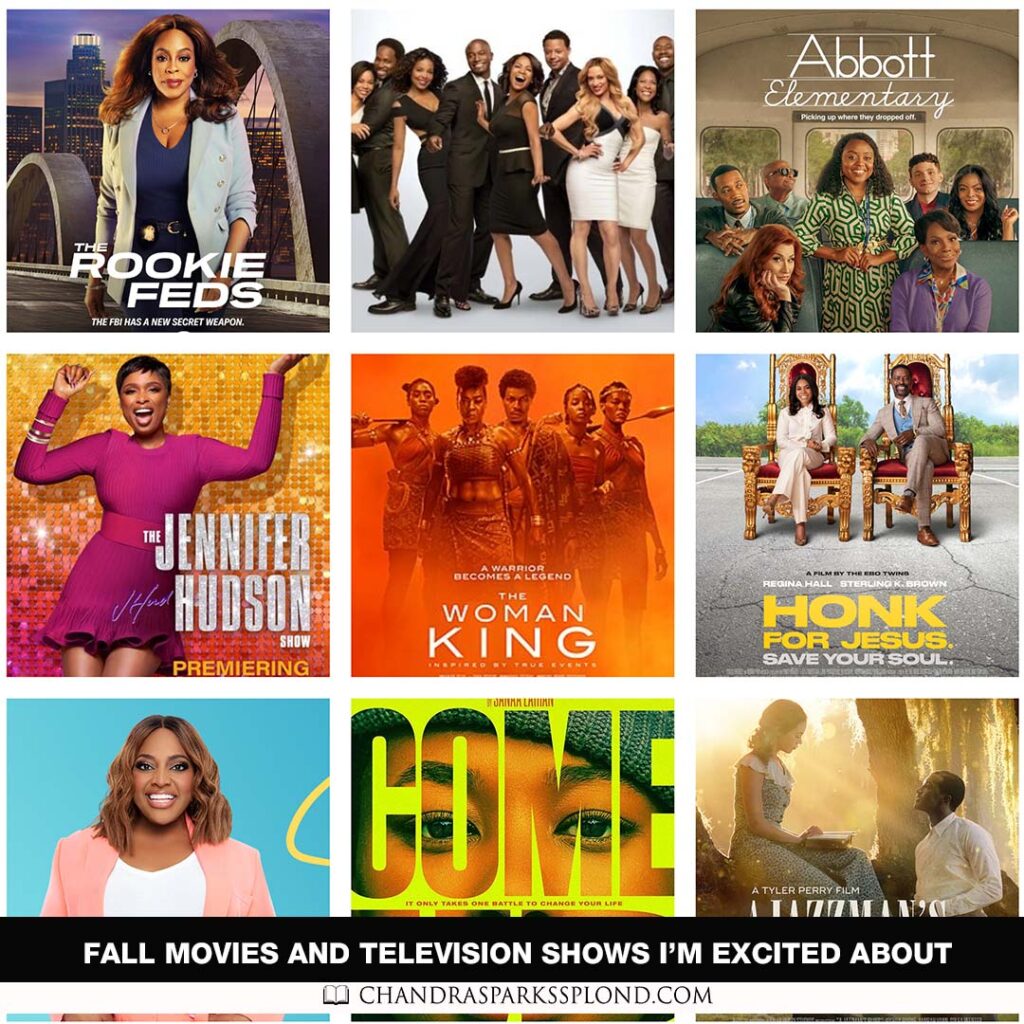 It’s beginning to look a lot like fall, my most favorite season of the year. Not only is my slow cooker about to get a workout, but so is my television since the premieres start this week. I did some searching online, and here is information for television shows and movies I’m excited about.

Sonny, a stay-at-home dad (played by Kevin Hart), finds himself with some “me time” for the first time in years while his wife (Regina Hall) and kids are away. He reconnects with his former best friend Huck for a wild weekend that nearly upends his life.

Honk for Jesus. Save Your Soul.

Where to Watch: Peacock

In the aftermath of a huge scandal, Trinitie Childs, the first lady of a prominent Southern Baptist Mega Church, attempts to help her pastor-husband, Lee-Curtis Childs, rebuild their congregation. This satirical comedy stars Sterling K. Brown and Regina Hall.

End of the Road

In this high-octane action thriller, a cross-country road trip becomes a highway to hell for Brenda and her family. Alone in the New Mexico desert, they have to fight for their lives when they become the targets of a mysterious killer. The movie stars Queen Latifah and Ludacris.

The two devious demon brothers Wendell and Wild have to face their arch-enemy with the help of the nun Sister Helly, who is notorious for expelling demons. However, the brothers are not only plagued by her, but also by her altar boys. The cast includes Jordan Peele, Keegan-Michael Key, Ving Rhames and Lyric Ross.

Where to Watch: FOX

The Jennifer Hudson Show is a daytime television variety comedy talk show that was created and hosted by Jennifer Hudson who recently reached EGOT (Emmy, Grammy, Oscar, Status) status. The show takes over the time slot held by Ellen Degeneres.

Where to Watch: FOX

Sherri’s warm, relatable and engaging personality will shine through as she offers her comedic take on the day’s entertainment news, pop culture, and trending topics with the daytime audience. As America’s favorite girl next door, her comedy-driven show will feature celebrity interviews, informative experts, moments of inspiration and amazing everyday people to create an hour of entertainment escapism.

Where to Watch: In Theaters

Starring Viola Davis and directed by Gina Prince-Bythewood (Love and Basketball), this historical epic is based in alternate history of The Kingdom of Dahomey, one of the most powerful states of Africa in the 18th and 19th centuries.

Where to Watch: ABC and Hulu

Tyler Perry’s tale of forbidden love and family drama unravels 40 years of secrets and lies against a soundtrack of juke-joint blues in the Deep South.

On the Come Up

Where to Watch: Paramount+

As the daughter of an underground hip-hop legend who died right before he hit big, Bri’s got massive shoes to fill. But it’s hard as she is labeled a hoodlum at school, and faces financial crisis after her mom loses her job. So Bri pours her anger and frustration into her first song, which goes viral, for all the wrong reasons. Bri soon finds herself at the center of a controversy, portrayed by the media, but with an eviction notice staring down her family, Bri doesn’t just want to make it, she has to. Even if it means becoming the very thing the public has made her out to be. Actress Sanah Lathan makes her directorial debut in this movie, based on the book by Angie Thomas.

Where to Watch: Hulu
Jax Stewart is known to be the most brilliant and fearless defense attorney in Los Angeles who bucks the justice system at every chance she gets; she’s judged for her questionable ethics and wild interpretations of the law until she’s needed. The series stars Michael Ealy, Pauletta Washington and Sean Patrick Thomas.

Where to Watch: ABC and Hulu

Where to Watch: CBS

A reimagining of the classic series in which Queen Latifah portrays an enigmatic figure who uses her extensive skills to help those with nowhere else to turn.

Where to Watch: In Theaters

Queen Ramonda (Angela Bassett), Shuri (Letitia Wright), M’Baku (Winston Duke), Okoye (Danai Gurira) and the Dora Milaje (including Florence Kasumba), fight to protect their nation from intervening world powers in the wake of King T’Challa’s death. As the Wakandans strive to embrace their next chapter, the heroes must band together with the help of War Dog Nakia (Lupita Nyong’o) and Everett Ross (Martin Freeman) and forge a new path for the kingdom of Wakanda.

The Best Man: The Final Chapters

Where to Watch: Peacock

The entire gang (Morris Chestnut, Taye Diggs, Nia Long, Regina Hall, Melissa De Sousa, Harold Perrineau and Terrence Howard) from the The Best Man franchise is getting together one final time with a few new additions to the cast (Nicole Ari Parker) for this limited series. Relationships evolve and past grievances resurface in the unpredictable stages of midlife crisis-meets-midlife renaissance.